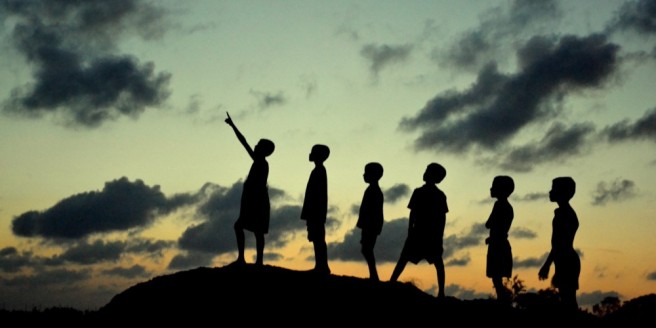 I saw a video, recently, that was floating around online – one of these things you end up watching mindlessly, on autopilot between more productive tasks. The video could have been scripted/staged; I don’t know, and it doesn’t really matter for the purposes of what I’d like to say about it.

In the video, a guy has affixed a bunch of one-dollar bills to his clothing – torso covered, front and back. He holds a sign as he walks through the downtown hustle and bustle of some large US city; the sign reads “Take what you need.” The guy is conducting an experiment: what happens if you offer free money to people, no strings attached, with the only guideline being that they should only take as needed?

You might be able to guess what happens next. Through the magic of selective editing, the video reveals two primary types of interaction between the money-clad man and the people he encounters: first, there are the greedy types, who spot the free cash and begin to snatch it off of him indiscriminately, in bunches. This happens several times; each time, the man (aptly) points out readily observable things about the person’s appearance, questioning how much they “need” the cash. (“Is that a real Louis Vuitton bag?… Do you really need this money?” etc.)

The greedy pigs provide all of the obscene answers that the video’s makers, I assume, want you to be disgusted by: “I have a nail appointment tomorrow”; “This is Starbucks money”, or whatever the particular response. Shameful, really, but that’s not actually my point.

The second type of interaction, captured in the climactic scene of the short video, arises when the money man happens upon a homeless person, sitting on a blanket asking passersby for change. The homeless man processes what stands before him, then proceeds to take exactly two dollars for himself. Cue the following exchange between the two men (captured in essence, if not verbatim):

You sure that’s all you need?

Yeah, I just need something to eat. I’ll be good with this. There are other people who need it more.

The money man, touched by the homeless guy’s display of empathy, gives him another fistful of cash ($50-$60 or so), thanking him for his humanity – a humanity which stands in stark contrast to the me-first jerks that paraded across the screen, moments before.

What I find interesting is what such an experiment might reveal to us about human nature and/or conditioning, on both the part of the people appearing in the video and all the rest of us watching it.

See, maybe in watching it, you’re inclined to take the perspective that whoever doesn’t grab the free cash is simply leaving it for the next greedy person – that nobody is actually going to leave it for the truly needy – so there’s no sense in not taking what you can get your hands on. Maybe this is the perspective that informs the actions of those gluttons we see in the video.

On the other hand, maybe you have some ethical makeup that would preclude you from taking the cash, so as a viewer you admonish the well-to-do who behave differently.

But what do the two camps think of each other, I wonder? My guess is that Camp A – the greedy jerks (sorry if I’m letting my personal bias seep into this label ) – sees Camp B as hopelessly naive. To a greedy jerk, the person who believes in the grand ideals of empathy and selflessness is being plainly unrealistic about the way the world actually works. Never mind that this line of reasoning provides a convenient justification for their own greediness; that’s beside the point…

The two camps, then, are locked in a tug-o’-war over the very nature of these grand ideals… Do empathy, selflessness and other human virtues provide an ethical standard that we should strive to uphold, or are they merely illusions that distract the naive from getting ahead in this world?

This big question is, in some way, observable all around us and in so many of the questions I’ve explored on this site, and in my everyday personal experience. I’m someone who has, in a sort of ‘official’ sense, opted out of the me-first rat race – not because of some nebulous, self-imposed ethical standard, but because of some very real discontent caused by my being on a career path that didn’t jive with my ethical disposition (right or wrong). And as I’ve now cautiously ventured out into the world, armed mostly with a determination to act in accordance with my values, I have routinely sensed a certain skepticism in my environment.

Have I had anyone tell me directly that they think I’m misguided or naive? No…people aren’t often that direct in such matters. But, without launching into some elaborate proof of my experience, suffice it to say that I do feel that pressure from time to time. Whether in the words and actions of people I encounter or in things I observe in my environment, there is a certain tendency to equate idealism and naivete.

I would like to suggest that the two are extremely different things.

To anyone who might characterize the pursuit of an ideal as naive, I would point out that there’s actually nothing more empowering than such pursuit. Whereas naivete consists of a passive expectation that the world might operate according to some ideal, the active pursuit of such ideal is something totally different: it’s actually, I would argue, the only antidote for the hardened skeptic.

The hardened skeptic sits back and points out the ills of the world, taking pride in an alertness that will never allow him to be duped or disappointed. He never expects things to go according to ideals, so he’s never surprised when they don’t. But while the hardened skeptic laughs at the very notion of idealism, I would bet that he routinely feels frustrated by the very same me-first forces of human nature that he’s so quick to identify… The hardened skeptic rants about corrupt politicians, greedy businessmen and the world, at large, that’s out to get him.

If you look closely…the hardened skeptic is bound by an unmistakable powerlessness.

It’s this powerlessness to which I’m claiming that active idealism is the antidote. The whole “be the change you want to see” thing, right? Turns out that’s not just hokey BS – it’s a prescription.

Here’s what happens when you actually do something in response to your frustration with the world: like magic, your frustration melts away (or at least dampens immensely)… Because as powerful as you may think the human mind is, it’s actually pretty limited in the breadth of things that it can focus on. The moment you go out and put some grand ideal into modest action, do your actions materially reduce the amount of me-first greed/corruption/malice that exists in the world? Nope, of course not. Do your actions even make a dent in favor of ‘good’ in some global sense? Not a chance.

But what does happen in that moment is that your mind’s capacity can no longer be devoted to a preoccupation with the ills of the world. And even if you are capable of rationally acknowledging the continued existence of those ills (as I did in the previous paragraph), you will no longer feel so frustrated by them.

I make these points as someone who’s discovered them, not invented them. I’ve been absolutely amazed by the degree to which the active pursuit of an ideal – however modest or (as yet) inconsequential – has served to silence my frustration with the world. There is, it would seem, nothing more empowering than taking control of that tiniest bit of influence that we can each have on our surroundings, particularly when in response to a frustration characterized by powerlessness.

(If you haven’t already, hold the Purgatory origins of this blog up to the light of what I just said… I can offer no better example to make my point.)

Returning our attention to the two camps of people, taking seemingly opposing viewpoints on the nature of virtuous ideals… Maybe their respective worldviews aren’t so opposite after all. Maybe the person who wouldn’t grab the money off the jacket knows darn well that some greedy jerk is going to come along and snatch it up anyway. Heck, she could even be objective enough to know that her small act of selflessness isn’t going to make much of an impact on the world. But maybe she’s okay with that, because she recognizes that the person who can make the biggest difference in the nature of her own experience with the world is…herself.

The hardened skeptic, when not laughing at the idealist, spends his time being frustrated by the ills of the world that he’s so good at identifying.

The active idealist, too consumed with improving her own experience, doesn’t have time for any of that.

One thought on “Me, Myself & Idealism”