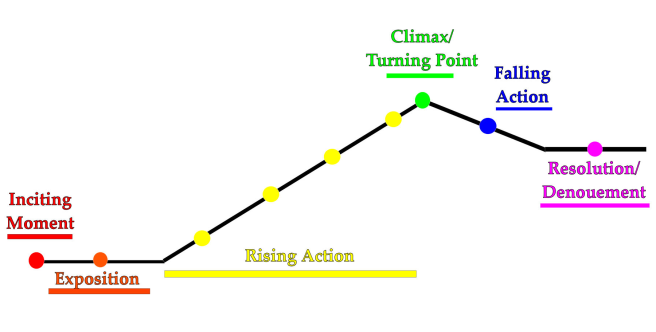 I wrote a first draft of this opening paragraph, then erased it and started over when I realized what day it is…

Today is the 183rd day since October 10, 2016, meaning it’s been exactly one half-year since I left white-collar purgatory in pursuit of something “more”. Since then, I’ve written off and on; mostly ‘off’, on account of my being consumed pretty much full-time by my new venture. As far as investment in one’s livelihood goes, the change I made has delivered exactly what I knew it would.

But that’s actually not why I sat down to write. I have a proper update to give; one that I want to document for posterity’s sake. The chronological milestone is only a coincidence, but I think it’s a poetic one. You be the judge…

I encountered my most significant roadblock today.

For context, I think I have to offer some specifics about the industry that I’m entering as a function of my new venture. To those who care enough to have an opinion, ‘mutual funds’ are a bit of a dirty word these days, but the fact of the matter is that I’m seeking registration with the Mutual Fund Dealers Association (MFDA) – an organization whose primary mandate is to regulate the distribution of mutual funds in Canada.

(In case you’re wondering, I’m of the view that mutual funds are a somewhat inefficient financial product. That’s a whole other discussion, but let me state for the record that a) there are some ‘pros’ to mutual funds that aren’t well understood, b) they are the best option available to me at this point in time, for their intended use, and c) I expect that better alternatives will be available to me in the relatively near future.)

In any case, the MFDA are the keeper of a set of rules that people in my line of work must adhere to. Enforcement of these rules is accomplished by way of a network of MFDA ‘dealer firms’; these are the member organizations of the MFDA. In order to be granted a licence to sell mutual funds and certain other financial products in this country, you must be sponsored by one of these ‘dealer firms’. There are a fairly modest number of them, which is perhaps one of the reasons why it tends to be that if one of these dealer firms rejections your application for sponsorship, others will follow suit.

The roadblock: I had my application for sponsorship rejected, today, by one of these firms.

Here is the full text of the email I received, this afternoon, to that effect:

We thank you for submitting an application to join [ABC Firm].

After careful review of your application and due diligence conducted, [ABC Firm] will not proceed with your registration.

The set up you established to pay your mutual fund commissions to a philanthropic non-profit organization – a matter you discussed with my Compliance Colleague – is a major concern to [ABC Firm]. Even though you have done your research in this matter, we are not prepared to engage in this type of arrangement.

[ABC Firm] has decided to decline the application.

We wish you the best in your future endeavours.

Some further technical context: the way that people in this industry earn money is via the commissions that are referred to in the message above. Theoretically, the agent/broker/advisor/salesperson (whatever they may call themselves) is providing value by way of advice and assistance with the transaction, thereby earning said commission in much the same way that a realtor ostensibly earns the commission they receive upon purchase/sale of a property. The degree to which people in these industries actually add value probably varies depending on the person, but I digress.

The salient point is that the basic structure of a business like mine involves delivering a service to clients, connecting them with mutual funds/insurance/etc and earning commission income in the process.

In 100% of cases up until I came along, anyone setting up a business this way in Canada has done so on a for-profit basis: create a company that you own, draw a salary from that company and own the profits that emerge after expenses are paid. By contrast, my recent experience has confirmed that there has never been anyone in my line of work (in Canada, anyway) who has sought to structure the venture as not for profit.

I’ve created this very complex diagram to compare the conventional model (A) with the evidently unacceptable model that I’m trying to set up (B). 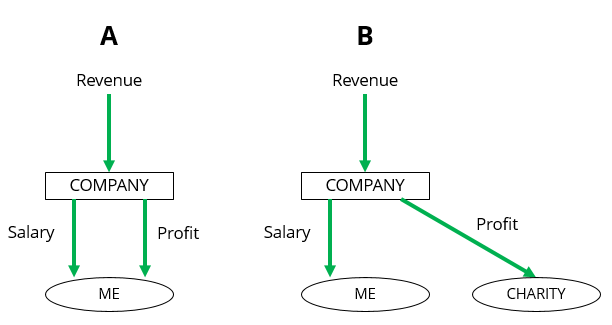 I should note that everything else in the two models above is held equal: it’s me in both cases (emphatically qualified, if I’m forced to say so), delivering exactly the same service to customers. It’s a matter of plain fact that the only thing standing in the way of my registration is the fact that I am seeking to structure my company in a way that forces me (and/or demonstrates my commitment) to give away profit.

Of course, disclosure of all relevant info would require me to supply you with the full text of the MFDA’s rules. You can look them up, if you want. Otherwise, take my word for it: I’ve read them in detail and am certain that my intended business model doesn’t break any of them. And even if I were wrong about that, it would only be because of some minor technicality (to be sure, there is no section that says “no non-profits allowed”), in which case I would argue that the rules are poorly designed. We’ve all heard examples of laws having unintended consequences; to the extent that I missed something in the rules that prohibits my doing what I’m trying to do, I believe this would be one such example. I mean… look at that diagram again. Also, re-read the longest paragraph in the rejection email above, which describes my venture in their words… Is there any universe in which I’m breaking the spirit of any rule that you could imagine as being appropriate to govern a whole industry?

In any case, I suspect that the reason for this rejection is plain old apprehension and/or misconception. I would guess that the folks behind the decision don’t understand the legal specifics of a not-for-profit corporation (e.g. that I, as a director of the entity, am just as liable in the event of fraudulent behavior as my counterpart with an ownership stake in a for-profit corporation). So I find myself in the bizarre position of being entirely calm and confident that I will eventually get the decision reversed, all while this roadblock poses a major problem for me in the short term.

If I was setting out to exploit some loophole that I’d found in the rules, wherein I’d perhaps identified an opportunity to obey the letter of the rule while simultaneously not acting in good faith, this would be the point at which I’d go “oh well, it was worth a shot” and go on my merry way. But to know my motives to be what they are, not to mention being confident that the very rules these people are evidently enforcing have no problem with what I’m trying to do?… Man… I’m not going anywhere.

The biggest problem with the terse note I received today is that it tells me virtually nothing about the reasons for my application being rejected; without that, it’s difficult to know where to direct my attention next. (Was it someone in the company who had a personal problem with the concept? Did they seek a ruling from the regulator above? Something else?) However, I think it’s also pretty telling that they were so vague; lending credence to the idea that it’s mostly general apprehension that’s informing the decision. It also supports my claim that I’m not actually breaking any rule; if I were, I’m sure someone would be happy to have pointed that out to me by now.

Well, for starters, I need to get more information as to the reason for the rejection. I’ve already made some progress on this and am confident that I’ll make headway pretty quickly on that front. Beyond that, what happens next will depend on the outcome of this inquiry… I’ll figure it out from there.

What I do know is that I’ve never felt more resolved about anything. This venture started as an attempt to find more meaning in my livelihood: an ambitious leap into the largely unknown. It was always to be expected that things would unfold slightly differently than I imagined (if I dared to imagine a specific version of the future at all). Now, true to form, things are heating up as they take shape… What began as an attempt to build a business delivering earnest value with integrity and using its proceeds to bear good to the world is fast becoming something broader… It seems I’m now on the precipice of having my primary focus be on championing an entire ideology. I didn’t think it was a terribly radical ideology – “hey, what if non-profits went head to head with for-profits in the name of social good?” – but it seems to be facing all the resistance of one.

A few days ago, as I sensed this roadblock coming, I said to my friend and now business partner (long story) that this difficulty is confirmation that we’re doing something that’s never been done before. Of the 85,000+ people in Canada who hold the licence I need (not to mention all those who came before), not a single one has ever attempted this. And it’s in pursuit of something that could only end up being a positive development for this industry and (in some minuscule way) the world at large… As terrifying as it is that I still have this big, red, ticking timer over my head, how fucking cool is this?

Notably, my current stress is at a fraction of the level I sustained during the depths of my frustration in purgatory. I mean that with all sincerity, just as I do this: if time runs out and I need to deliver pizzas or rake yards to stay on this path, I will happily do so. I’m energized, buoyed by the strength of my purpose and having the time of my life.

So while I can’t say that at outset I knew exactly where I’d be at this point, I do feel confident in saying that on the whole, a half-year in, I couldn’t have asked for better.